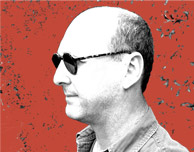 MICHAEL KURCFELD is a long-time print journalist and editor who in 1990 made the transition to electronic media (laserdisc, CD-ROM, video, eventually the Web). Originally trained as an artist at Art Center College of Design in Los Angeles, he began professionally as a magazine designer but while at New West Magazine (founded as a west-coast sibling to New York Magazine) he soon evolved into a respected journalist & critic covering the Los Angeles art scene in the 1980s. After writing for various publications, teaching and curating exhibitions, he served as Arts Editor at LA Weekly for four years. In 1989, he left that position to spend two years in Japan, where he wrote about the country's emerging avant-garde in the midst of its economic rise, which led to producing two documentaries: on new Japanese theater, and on Japanese animation.

In 1991, Kurcfeld was hired by The Voyager Company to work as a laserdisc producer in its Criterion Collection arm, until the company migrated to New York in 1993. In that time, he produced such titles as The Player, Spartacus, Repulsion, Jules & Jim, The 400 Blows, and Boyz N The Hood. In 1994, Kurcfeld became a producer at AND Interactive, where he developed a prototype for an interactive broadband arts magazine (Fire), for the company's primary client, TCI. When AND went out of business, Kurcfeld returned to his journalism roots and produced film coverage for E! Online before moving to New York, where he produced segments for IFC's newly launched broadband site, for WNET's award-winning culture magazine show Egg, and 1-hour profiles for Bravo.

He is currently producing an ongoing series of video profiles of top fine-art photographers around the globe for Los Angeles Review of Books.